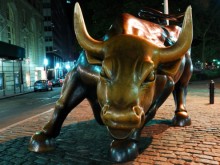 
When banking giant Citi announced it would lay off 11,000 employees last May in a bid to save a billion dollars in expenses, Arthur Hayes was one of the staffers given a pink slip.

Hayes had been a 'Delta One' proprietary trader for Citi in Hong Kong, acting as a market-maker for the bank's Asian exchange-traded fund products. He had spent his career in financial institutions, starting out at Deutsche Bank.

While polishing his resume to rejoin the job market, Hayes came across bitcoin. He couldn't resist trading the cryptocurrency. To his delight, the markets turned out to be a gold mine for him:

"I found there were lots of inefficiencies. If you apply traditional financial theory, it was mispricing everything. There was lots of money to be made trading bitcoin."

Suddenly, reporting to yet another managing director at a bank became less attractive to Hayes. Trading bitcoin for a living beat hitting targets for bonuses.

"You work all year for someone else [at a bank], then they'll tell you what you're worth with your bonus. With bitcoin, it's better. Everything you make is yours," he said.

Hayes isn't the only one to turn his back on traditional finance to seek opportunities among cryptocurrencies. In the cryptomarkets, traders are finding the volatility they used to find in stocks, currencies and commodities even as big banks continue to cut jobs and pay billions in fines in the aftermath of the financial crisis.

Regulators have slapped big banks with huge fines in the last two years. The biggest and most recent fine to date has been Bank of America, which agreed to pay $16.65bn to the Securities and Exchange Commission in August. The six biggest banks have paid $130bn in fines and settlements since 2009.

It's not just money that's flowing out of the banks. They're continuing to shed jobs around the world, too. Citi announced this month that it would shutter its consumer banking business in 11 countries, including Japan. JP Morgan is on track to make 17,000 positions redundant by the end of the year. According to research by Johnson Associates, banking as a whole is 20,000 jobs below the level of employment before the financial crisis.

All of this means that bank employees with a yen for cryptocurrency are more likely to make the jump now rather than wait to be pushed out. One of those people is George Samman, who managed portfolios at Wellington Shields, a New York brokerage. Today, he's trying to build a bitcoin derivatives exchange at BTC.sx.

"Finance isn't the glorious place it once was. Bonuses are low, salaries are low. It's not where you want to be any more," he said.

Samman describes meeting "old-school" former colleagues recently who bombarded him with questions about getting into the bitcoin markets. They were tired of watching placid equity markets at work:

"It's been slow for awhile ... Everyone's in a sad, miserable state because there's no money to be made. Trading volumes have been low, commissions have been slashed over time and it's a completely different place to what it was – and it's not coming back."

Although the markets – particularly US equities – have been roiling in the last two weeks, they have been placid in recent years. From stocks to oil, traders have struggled for years to find the volatility they need to make money.

The VIX, known colloquially as the 'fear index', is the most widely used gauge of volatility in the US equities market. Last year it hit a five-year low of 11.3, well below its range the previous year. The Federal Reserve's quantitative easing policy is generally held to be the cause of low volatility in the financial markets.

Traders are hurting. A survey of the financial industry conducted in July by brokerage ConvergEx found traders grousing over the difficulty of trading profitably in a low volatility environment. More than 60% of firms on the sell-side –  those who deal in products and services supplied to buyers like hedge funds and other institutions – said low volatility had been 'bad or very bad' for business.

Jean Marie Mognetti ran a commodities fund under the Global Advisors banner in Jersey. But as commodities trading ground to a halt because of low volatility, he and his partner, Daniel Masters, a former top trader at JP Morgan, began trading bitcoin for themselves

"We had a simple bullish view, and the more we saw, the more we wanted to see. It came to the point that we said we need to share this investment opportunity with other people," he said.

Mognetti and Masters launched Global Advisors Bitcoin Investment Fund, a hedge fund for bitcoin based in Jersey, in July. They plan to have $200m under management, and have bought a first tranche of bitcoin from Digital BTC, the miner that listed on the Australian Stock Exchange.

"I can tell you right away, crude oil is extremely boring for the last year and a half [...] We're still trading commodities, but our commodity focus is slowing down because clients are not liking them. It's just like us being bored of crude oil."

By contrast, clients are clamouring to get in on the cryptocurrency action, Mognetti claimed:

"We never managed to sell anything in Jersey in six years. Now we get people in Jersey calling us," he said, days after his fund announced its launch in August.

Wall Street is losing its lustre among graduates

Former Wall Streeters who cross over to cryptocurrencies say they are hardly being ostracised for dealing in exotic digital assets. Instead, ex-colleagues are peppering them with questions and giving them kudos for closing profitable trades in digital currency markets.

Gavin Smith, who heads First Global Credit, a firm that provides contracts-for-difference on global equities that can be bought with bitcoin, said the cryptocurrency markets are what traders have been looking for since volatility died down in recent years.

"[Cryptocurrencies] are more comfortable for people with our background because we're used to hedging what is quite a volatile underlying [asset]. The oil side of things has been especially quiet over the last three to four years. but we're used to the challenges of protecting your position in a more volatile environment."

Earning big bucks at a bank appears to have lost its lustre among young people joining the workforce for the first time. Research by Universum, a recruiting consultancy, shows that the attractiveness of joining a bank has dropped among business and commerce students over the last three years.

According to Universum, finance students, meanwhile, are still enthusiastic about bank careers, but they now see it as a stepping stone towards being an entrepreneur.

"No one in banking loves their job. They're there because they're making money – currently. But they all understand that if there's something new and exciting, and there's a possibility of making great returns, they're totally supportive of it. All the startup guys make way more money now than banking guys, anyway."