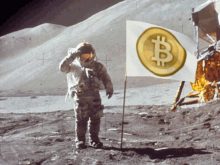 As of writing, Bitcoin is hovering around $745 per coin. It has only been worth this much twice before – once on the way up to the height of the Christmas 2013 bubble, and once on the way down.

So of course everyone wants to know why. But like any public market, there really is no way to possibly know what is actually driving the price up. But we can guess, so here are a few things that could be behind this price spike.

Ever heard of the halving? Well if you follow Bitcoin and haven’t, get ready for it to soon dominate the cryptocurrency news cycle. Let me explain. Bitcoin was designed as deflationary currency – there will ever only be 21 million coins in existence, and fewer and fewer will be mined as time goes on.

This is because Bitcoin’s core code dictates that every 210,000 blocks mined, the mining reward is halved. So it started at 50 BTC per block, in late 2012 fell to 25 BTC per block, and is expected to half again to 12.5 BTC per block in about three weeks.

Since miners will soon essentially see their profits cut in half, this price increase could just be the Bitcoin economy’s natural (and designed) reaction to compensating for that.

Bitcoin Core is the code that powers bitcoin. It is maintained by a trusted team of Bitcoin Core developers who are responsible for the direction of the cryptocurrency.

As we discussed last week, the team is working on a few major updates mainly related to increasing the capacity and speed of the network so more transactions can be confirmed faster. While the details are pretty technical, just know that one possible cause of the price increase is excitement about new Core technologies that will soon be rolled out.

The last option is that there are events happening in our world economy that are bringing uncertainty to the markets. A potential Brexit, the U.S elections, and potential stagnation in Asia are all making both individual and institutional investors wary.

When there is economic uncertainty, people usually move their money into safe stores of value like Gold, which is trading at six-month highs. While Bitcoin isn’t typically thought of as a stable and safe investment, that could be changing, especially as Chinese investors are looking for places to put their money that is out of reach of the Chinese government’s strict regulatory environment.

One last parting piece of advice – as exciting and tempting as it is to watch any form of real money appreciate so quickly, remember to remain rational.

Almost anyone who has ever been involved in Bitcoin is probably kicking themselves right now for not stocking up a year ago or even a week ago. Others may feel a temptation to stock up right now because they think the price is only going up. This is probably an awful idea. As we’ve learned, Bitcoin is its own beast, and will do what it wants. If you try to time any public market you most likely are going to lose a lot of money.